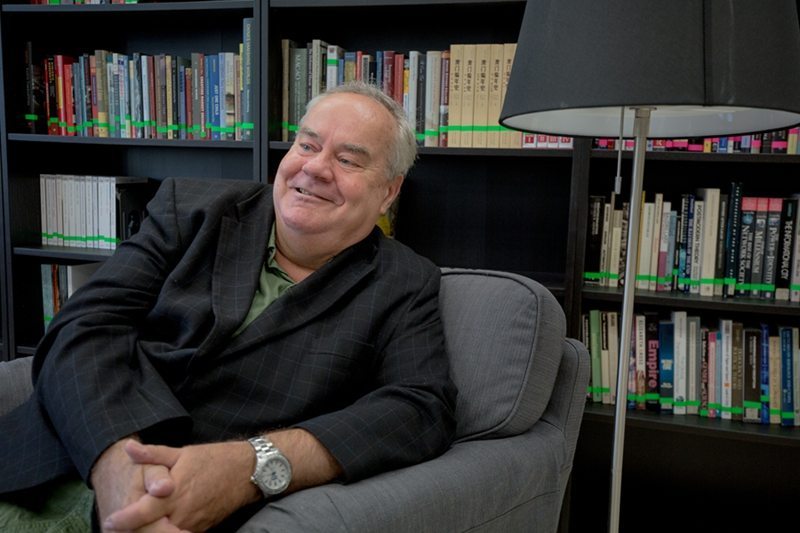 A good teacher can have a significant impact on the lives of his students. Associate Professor Peter Zabielskis is such a teacher. He is very strict with his students. He encourages them to ask questions and think critically, and often tells them,‘Your thinking can change the world.’Growing up in a culturally diverse family, this anthropologist has a unique way of looking at the world.

A Diversity of Realities and Cultures

In the 1990s, Prof Zabielskis’s grandparents moved from Lithuania, a country in Eastern Europe, to New York City, to flee political and economic problems. Born in New York and growing up under the mixed influence of Lithuanian and American cultures, Zabielskis became a ‘self-conscious’ American. ‘I love being American but I am aware of the differences all the time,’ he says. Throughout his life, he often has to explain to other people where Lithuania is and what kind of place it is. This made him realise that there’s such a diversity of realities and cultures on this planet. ‘I think it encourages me both to love where I live and the opportunities that place gives me, but also not to get totally attached in my life forever to that place,’ he says. Growing up in a culturally diverse family gave him a valuable perspective and influenced the way he would later see the world.

Prof Zabielsksi’s classes are
very popular with the students

With this passionate curiosity about human culture, he devoted himself to anthropology with a specialty in built environment after working in many fields, including art and philosophy, and received his doctoral degree from New York University. He conducted many academic research projects, including a two-year field research project on traditional architecture in Malaysia. That experience deepened his understanding of the importance of the natural environment and how human-made environment affects our everyday lives. He used the word‘excitement’ to describe anthropology. ‘It is the study of the human species, and that can never end: that’ s always  exciting, there’s always more to learn,’ he says.

Prof Zabielskis attaches great importance to teaching, and he inspires his students to think about original yet essential questions from a philosophical perspective. ‘Every culture in this world has this human activity to make a comfortable place for itself in this natural world,’ he says. ‘So that is a philosophical idea: what do we need in this world? And it’s not just basic survival things. We need art, creativity, and beauty.’

Prof Zabielsksi: My family background
has greatly influenced the way I see the world.

In Prof Zabielskis’ class, there’s always a praise for rigorous thinking, a desire for solution, and encouragement for working together and wanting more. When choosing topics for class discussion, he would choose those that interest and excite him, because he believes that students could feel the same passion and emotion, as in his words, ‘it’s contagious.’ He believes that problems can be solved with people working together, as he has illustrated many times in class with real-life cases to motivate students to find the solution, which essentially tells his students: your thinking could change the world. ‘We are now in a new world and we need new thinkers for it. And of course we need people in Asia and China to develop social theories and philosophy on a global scale. I would like to keep encouraging people who have talent in this to keep going and let the world hear those people.’

‘Don’t leave the problem with an ending that humans are doomed.’

Students in Prof Zabielskis’s class enjoy a great deal of freedom. He wants his students to be challenged but not confronted; they are required to engage in the activities, but how perfect the answers are does not matter and will not be graded. The most interesting part is the presentation, whose name is ‘Tell me something I don’t know’. Students can choose whatever topic they want as long as it is something interesting to them and related to the class. Given this condition, he has found that students can suddenly get rid of their shyness and become willing to talk. ‘Students enjoy holding the microphone in their hand and speaking to the class as long as you give them the right format,’ he says. ‘That’s a very beautiful thing to see.’ Besides that, he encourages them to come up with a solution to the topic students have committed to.‘Don’t leave the problem with an ending that humans are doomed; humans created the problems and humans can solve them,’ he always tells his students.

Prof Zabielskis wants his students to be responsible citizens to the world. ‘When I see the face of a student light up, I think that’s the best reward for my efforts,’ he says.

Source: MyUM Prof Peter Zabielskis: The Anthropologist Who Is Fond of Human Culture